Is There No Alternative? 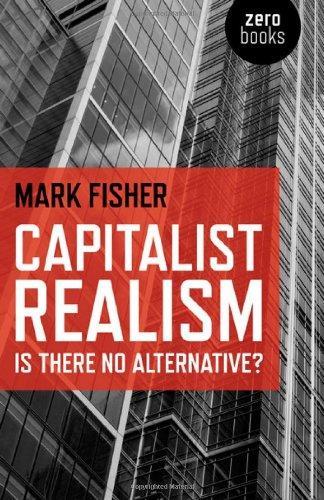 Capitalist Realism: Is There No Alternative? explores Fisher's concept of "capitalist realism," which he takes to describe "the widespread sense that not only is capitalism the only viable political and economic system, but also that it is now impossible even to imagine a coherent alternative to it."The book investigates what Fisher describes as the widespread effects of neoliberal ideology on popular culture, work, education, and mental health in contemporary society. Capitalist Realism was an unexpected success and has influenced a range of writers.The subtitle refers to British Prime Minister Margaret Thatcher's pro-market slogan "There is no alternative".

This is the second book of Mark Fisher's that I've read (the other being "The Weird and the Eerie") where I have the feeling of the words washing over me, but just no idea of what's going on. I'll probably give it a re-read at some point, especially as it's so short, just to see what all the fuss is about, but I'm afraid this read pretty much made no impression.

Like Adam Curtis's Hypernormalisation, this book is a heady attempt at parsing the continuum of what Fisher calls "the Real" and "the big Other." He invokes Marx, Baudrillard, Lacan, "Office Space," Nirvana, and "Children of Men" with equal deference, utilizing pop culture and theory to explain the puzzling, if no less certain, links between neoconservativism and neoliberalism, and posits a leftist anti-capitalist project based on critical analysis of capitalist realism's offerings and shortcomings, as much as its obfuscatory sleight of hand aims at perpetuating a sense that it is, itself, unalterable and unable to be opposed.